Find traditional instrumental music
This is the stable version, checked on 4 July 2020.
Jump to: navigation, search 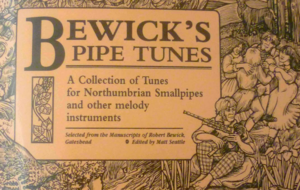 HEY MY NANNY. AKA and see - Hey My Nancy, Oh My Nanny, Hay My Nanny, Hey Me Nanny, Up in the Garret I am, Follow Me Lads (2) Scottish, English; Jig (9/8 time) and Country Dance Tune. England, Northumberland. A Mixolydian (Bremner, Gow, Vickers, Young): D Major (Huntington, Kennedy). Standard tuning (fiddle). AABB. The melody appears in the Northumbrian Bewick's Pipe Tunes as "Oh My Nanny," although "only the first strains correspond in detail" (Seattle). The melody appears in the Drummond Castle Manuscript in the possession of the Earl of Ancaster; it is inscribed "A Collection of Country Dances written for the use of his Grace the Duke of Perth by Dav. Young, 1734". Robert Bremner prints a version in his 1757 Collection of Scots Reels, which John Glen (1891), evidently not knowing of Young's MS, thought was the earliest printing. The title also appears in Henry Robson's list (as "Hey, My Nanny, My Nanny") of popular Northumbrian song and dance tunes ("The Northern Minstrel's Budget"), which he published c. 1800. The tune "Hunt the Fox" in Ryan's Mammoth Collection/Cole's 1000 is very similar. There is some thought "Hey My Nanny" may be the ancestor of "Drops of Brandy (1)."

Irish collector Frank Roche's "Up in the Garret I am" is a distanced version, most similar to the version that the Gows published. Edinburgh music publisher Neil Stewart's version in 6/8 time, printed in his Select Collection of Scots, English, Irish and Foreign Airs, Jiggs & Marches, vol. 3 (c. 1788, also published by Elias Howe's in 1880-1882), is also a distanced variant of the usual 9/8 time.