Find traditional instrumental music
This is the stable version, checked on 15 November 2021.
Jump to: navigation, search

I AM ASLEEP AND DON'T WAKEN ME [2] ("Taim I mo chodhladh is na duisigh me," "Táimse im/mo chodladh" or "Ta me mo chodladh"). AKA and see “Cold Frosty Morning (2),” "Lament of a Druid,” "Past One O'Clock," "Thamama Hulla" (an Englished version of the Irish title). Irish, Air (3/4 time). G Major (Thompson): G Mixolydian (Roche, Tubridy): F Major (O’Sullivan/Bunting): F Mixolydian (Stanford/Petrie): D Major/A Mixolydian (Cranitch). Standard tuning (fiddle). AB (O’Sullivan/Bunting): AAB (Stanford/Petrie). A variant of version #1. The first printing of the tune in Ireland was in John and William Neale’s Collection of the Most Celebrated Irish Tunes (Dublin, date of publication usually given as 1721 or 1726, although 1742 is the date Bonnie Shaljean gives in the Appendix to the 2001 edition of O’Sullivan’s Carolan: Life and Times; this based on watermark analysis), the first collection of Irish melodies (Ó Canainn, 1978). As with some other airs, it is unclear whether original provenance lies in Scotland or Ireland, as the melody appears in publications around the same time: if the earlier date for the Neale’s publication is correct, then it predates the Scots appearance in Stuart's Music for TTM, c. 1725/6 (where it is given as "Chami ma chattle"). However, there is a parallel in Scottish/English tradition (see note for "Cold Frosty Morning (2)"). It was used in ballad operas of the 18th century (such as Flora, 1737) and is still quite common in the tradition. Cowdery (1990) identifies this tune as a member of "The Blackbird" family. See also the Scottish "Jeanie's Black E'e."

A story is told by O'Neill regarding this tune, quoted in O'Sullivan (1983):

When at Mr. Macdonnell's of Knochranty in the county of Roscommon, he met a young nobleman from Germany who had come to Ireland to look after some property to which he had a claim through his mother. "He was one of the most finished and accomplished young gentlemen," says O'Neill, "that I ever met. When on one occasion Hugh O'Neill and I played our last tunes for him, he wished to call for 'Past one o'clock,' or 'Tha me mo chodladh, naar dhoesk a me,' which he had heard played somewhere before, but for the name he was at a loss. Perceiving me going towards the door, he followed me, and said that the name of his bootmaker was Tommy McCullagh, and that the tune he wanted was like saying 'Tommy McCullagh made boots for me;' and in the broad way he pronounced it, it was not unlike the Irish name. I went in with him and played it, on which he seemed uncommonly happy.

Blind harper Arthur O’Neill (1734–1818), originally from County Tyrone, mentioned the tune (as “Past One O’Clock”) in his memoirs. As a young man he stayed seven years with a Colonel White of Red Hill, County Cavan, and visited his neighbor, a Mr. Norris Thompson, every Saturday night:

I spent my time very pleasantly between Colonel White and Mr. Thompson. I spent one Saturday night with Mr. Thompson particularly and he was so uncommon fond of the tune ‘Past one o’clock’ that we both tête-à-tête finished four bottles of good old port wine, I playing the tune all the time except when lifting my hand to my head.

The Gaelic song “Táimse im’chodladh” is an allegorical lyric, with a beautiful lady personifying Ireland appearing to the writer in a vision, beseeching him to arise and take arms against the invader. It thus falls in the Asiling, or ‘vision’, tradition of Irish poetry and song. It has been asserted that it was composed in the 18th century in Munster. A translation by Dr. Eoin O’Neill of the Irish lyric, goes:

The melody was a part of the old Irish harp tradition, and was also absorbed into piping tradition. County Leitrim piper and fiddler Stephen Grier (1824-1894) included the air in Book 3 of his large c. 1883 music manuscript collection. Piper Brian McNamara (2004) calls it one “of the great airs associated with the Uilleann pipes.” For Scottish versions of the air, see "I Am Asleep and Don't Waken Me (1). See also note for "Past One O'Clock" for more. 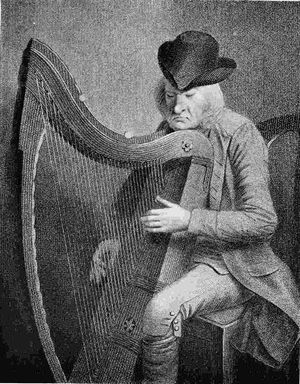 Additional notes
Source for notated version : - the 1861 manuscript collection of James Goodman, an Anglican cleric who collected in County Cork [Shields]; Bunting noted the melody from Denis Hempson the harper at Magilligan in 1792 (he noted a variant of the tune, "Soft Mild Morning (A)" from the same harper four years later). Hempson was the only harper Bunting heard who played in the ancient style, with long curved fingernails plucking brass strings. The collector greatly admired the playing and repertoire of Denis Hempson, and elderly man when the nineteen-year-old, hired to make some transcriptions at the Belfast Harp Festival of 1792, first met him:

Hempson, who realized the antique picture drawn by Cambrensis and Galilei, for he played with long crooked nails, and in his performance, “the tinkling of the small wires under the deep notes of the bass” was particularly thrilling, took the attention of the Editor with a degree of interest which he never can forget. He was the only one who played the very old—the aboriginal—music of the country; and this he did in a style of such finished excellence as persuaded the Editor that the praises of the old Irish harp in Cambrensis, Fuller, and others, instead of being, as the detractors of the country are fond of asserting, the ill-considered and indiscriminate, were in reality no more than a just tribute to that admirable instrument and its then professors. [1]