Find traditional instrumental music
This is the stable version, checked on 22 November 2022.
Jump to: navigation, search

Back to Lady Mary Ramsay (1) 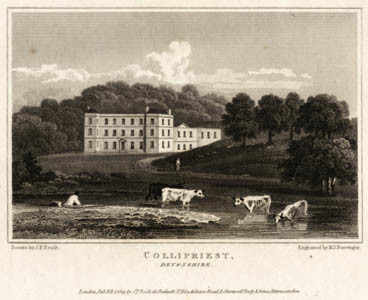 Colliepriest House, Devon.
Lady Mary Ramsay (1780-1866) was the daughter of George Ramsay, 8th Earl of Dalhousie, and her brother was William Ramsay Maule (see "Mr. Maule’s Frolick"). In 1801 (a short time after the tune bearing her maiden name was published) she married James Hay of Drum (1771-1822), then Collipriest House, Tiverton, Devon, who was part of the Hay of Pitfour family, Perthshire, and who was later the High Sheriff for Devon. She bore nine (or, by some accounts, twelve) children and long outlived her husband, removing in her widowhood with her family to Linden Lodge, the gatehouse to Mavisbank House, Loanhead, Midlothian, near Edinburgh. She died at age 86 at Linden Lodge.

The tune is generally considered to have been composed by Nathaniel Gow (1763–1831), and is attributed to Gow in the Fourth Collection (1800) and in Part 4 of his Complete Repository. It was also issued by the music publication company of Gow & Shepherd in Edinburgh on a single sheet in 1800 as "Lady Mary Ramsay's Strathspey & The Earl of Dalhousies Reel, a new Medley" where it is also credited to Nathaniel Gow. An excellent tune, it is one of his best-known compositions, and perhaps was a centerpiece for Nathaniels dance band at the time. However, an alternate compositional claim is mentioned by Keith Norman MacDonald in his Skye Collection (1887): "This tune...(appears) in James Porteous's Collection and having his initials attached it is possible he may have been the composer of it". Porteous's name for the melody was "Auld Toon o' Edinburgh." Researcher Paul Cooper records that Nathaniel's "Lady Mary Ramsay" quickly became a popular dance melody in London in the very early 19th century, again perhaps promoted by Nathaniel's brothers in that city:

Early London publications included Thomas Budd's 1801 31st Book under the name Lady Mary Ramsay's Reel (see Figure 4), William Campbell's c.1802 17th Book, Joseph Dale's c.1802 1st Number, the Preston and Thompson collections of 24 Country Dances for 1802, and in both the Davie and Goulding collections. It would go on to be published in George Walker's 1804 4th Number and Hodsoll's 12 Country Dances for 1805; it can also be found in the collections of Andrews and Bland & Weller. It would also be referenced as a popular tune in both Thomas Wilson's 1809 Treasures of Terpsichore and in Edward Payne's 1814 Companion to the Ball Room[1].

The name of the strathspey was shortened by Shetland fiddlers (as "Mary Ramsay") and played as a reel. It has been suggested that this occurred when the tune first circulated on the islands, via [J. Scott Skinner's] gramophone records, the play-back was at a faster tempo than the original performance and it was assumed that it was a reel. The Shetlanders had no knowledge of strathspeys in the country districts (Alburger {1983}, quoting the late Shetland collector and fiddler Tom Anderson). However, the a version of "Lady Mary Ramsay" was known in tradition in the Shetlands at least as far back as the 1880's in a Shetland Reel version called "Sail Her ower da Raft Trees" (see "Sail Her ower da Raft Trees" for more).

In Ireland the tune was a popular Highland fling and reel, going under such titles as "Four Provinces Flings (3)," "Queen’s Shilling (The)," and "Jamie Duffy's Highland" (see "Lady Mary Ramsey (2)"). A version in Boston, Mass., publisher Elias Howe's Ryan's Mammoth Collection (1883) is to be found under the title "Forget Me Not (3)."

Back to Lady Mary Ramsay (1)