Find traditional instrumental music
This is the stable version, checked on 17 July 2021.
Jump to: navigation, search

Back to Largo's Fairy Dance 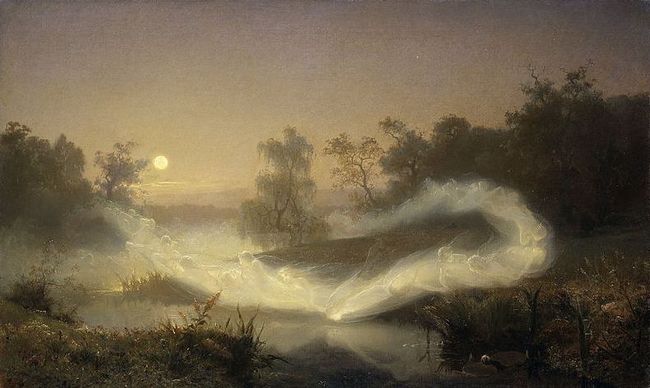 LARGO'S FAIRY DANCE. AKA and see "Daunse ny Farishyn," "Ferry Reel (Da)," "Fairy Dance," "Fairy Reel (1) (The)," "Jolly Banger (The)," "Quadrille des bûcherons: 3ème figure," "Reel Combiné," "Ronde des Vieux (La)," "Rustic Dance (1)," "Set canadien 1ère partie." Scottish, Reel. C Major (Emmerson, Gow): D Major (Hardie, Hunter, Lowe, Skinner). Standard tuning (fiddle). AB (Hardie): AAB (most versions): AABB' (Skinner). A piece for the eightsome reel composed by bandleader, publisher, fiddler and composer Nathaniel Gow (1763-1831) for the Fife Hunt in 1802, by which organization he was employed for their balls. Largo is a small parish in Fife containing two villages, Upper Largo and Lower Largo, and a hill, Largo Law. The original "Largo's Fairy Dance" was a medley consisting of two Gow-composed tunes, "The Fairy Dance" and "The Fairies Advance." David Johnson explains that Gow seems to have then set the melody as an introduction and march for keyboard in D Major, which was published on a single sheet about 1805 (such sheets often contained sets for dancing). It was again published in reel form in C Major in the Gow's Fifth Collection of Strathspey Reels of 1809. It is Nathaniel's most famous reel, and, indeed, one of the most recognizable of fiddle tunes.

"Largo's Fairy Dance" is "as popular today as the day it was written," opines Collinson (1966), although modern fiddlers invariably play it in D Major, rather than the C Major of the 1809 printing, and have largely dropped the word 'Largo' from the title. A famous set of variations [1] were composed by J. Scott Skinner, first published in his Harp and Claymore (1904) collection. Emmerson (1971) identifies a sub-group of Scots reels with the characteristic quarter note/two eighths notes/quarter note/two eighths notes per measure rhythm, including this tune as well as "De'il Among the Tailors," "Rachel Rae," and "Wind that Shakes the Barley (The)" (he says this last tune is "substanitally" a set of "Fairy Dance." Breathnach (1985) concurs, saying it was composed 'under the influence' of "The Wind that Shakes the Barley." The Scottish Hardie family, notes Bill Hardie, "have traditionally played this reel as a follow-lup to 'Smith's (The).'"

The melody entered North American tradition and can be found in America under the title "Old Molly Hare," "Grandma Blair," and similar old-time variants, and in Quebec as "Reel Combiné" (identical to the original), "Ronde des Vieux (La)," "Set canadien 1ère partie," "Quadrille des bûcherons: 3ème figure." On the Isle of Man it is called "Daunse ny Farishyn."


Back to Largo's Fairy Dance