MAD MOLL [1]. AKA and see "Cuddle Me Cuddy," "Cuma Liom," "Here We Go Up, (Up, Up)," "Peacock Followed the Hen (The)/Peacock Follows the Hen (The)," "Riding a Mile (1)," "Up and Down Again," "Virgin Queen," "Yellow Stockings," "Is Cuma Liom" (I Don't Care). English, Air (9/8 time). F# Minor (Chappell): A Minor (Kennedy). Standard tuning (fiddle). AAB (Chappell): AABB (Kennedy). The title dates at least from 1698 when it was published in Playford's Dancing Master [1], 9th edition, Part II, which may be the earliest printed version of the tune, although R.D. Cannon in his article "English Bagpipe Music" (Folk Music Journal, 1972) suggests the progenitor of this large tune family is the Scots jig "Up with Aley." A comic play, Mad Moll, by Thomas Middleton and Thomas Dekkar, was penned in 1611 and featured the heroine Moll Cutpurse. George Petrie prints an untitled version collected in Ireland in his collection of 1855 (Stanford/Petrie, No. 101, p. 25). 'Mad Moll' may refer to Mary, Queen of Scots, suggest Stokoe and Bruce, who was subject to periods of mental incapacity. However, it is more likely that "Mad Moll" had more to do with Middleton and Dekkar's character Moll Cutpurse, based on the real-life actress, pickpocket and fence Mary "Moll" Frith [2] (1584-1659). Moll's 'madness' appears to have been linked to her transgressing the mores of the day, including her lifelong habit of wearing men's clothing, smoking, swearing, and otherwise acting unconventional; all of which she as unapologetic for, even after she was released in June, 1644, from Bethlem Hospital (Bedlam) after 'being cured of insanity'. 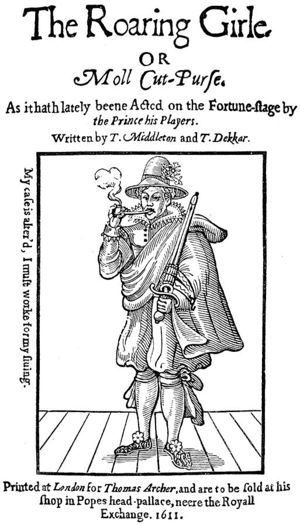 The tune was the vehicle for a country dance call "Virgin Queen", and appears under that title in Playford's Dancing Master of 1703 and later editions, and as "Yellow Stockings" (the name of another dance) it is in Wright's North Country Frisks (1713) and in the ballad opera The Boarding School (1733). See Borders and Northumbrian versions under the titles "Cuddle Me Cuddy" and "Peacock Follows the Hen (The)." As "Mad Moll" the tune appears in Burton Leonard, Yorkshire, miller and fiddler Joshua Jackson's (1763-1839) music manuscript copybook (kept from 1798 until about 1820). Other titles in the tune family include "Brose and Butter," "Hey My Nanny/Hey My Nancy," "Honeymoon (The), "Dusty Miller (The)," "Faraway Wedding," "Follow Her Over the Border," "Cudgel (The)," "Jerry Houlihan" "Kitten (The)," and "Drops of Brandy."

"Mad Moll [1]" was also the vehicle for songs in the ballad operas Momus turned Fabulist (1729) and The Jealous Clown; or, The Lucky Mistake (1730). Use of melodies in ballad operas and for dancing was a two-way street, with much traffic between the two. Playwrights and producers may have been attempting to make their products accessible to a general audience by employing relatively well-known or popular tunes for songs, or, as Bruce Olson suggested, perhaps publishers reused plates from their country dance collections when they needed to insert an air in their opera publications, and selected melodies that scanned to the words.