Marquis of Huntly's Strathspey (1) (The)

Find traditional instrumental music
This is the stable version, checked on 9 January 2022.
Jump to: navigation, search

Back to Marquis of Huntly's Strathspey (1) (The) 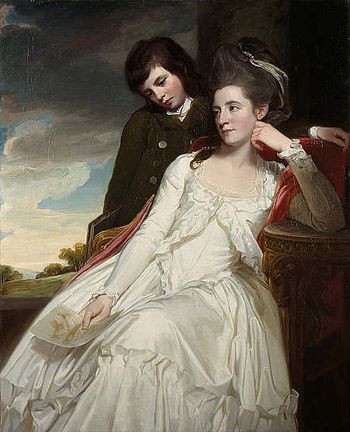 Jane Maxwell, Duchess of Gordon, and her son George, by George Romney, 1778.

The title Marquis (sometimes appearing as Marquess) of Huntly (in Aberdeenshire) was the secondary title of the Dukes of Gordon and was normally given to an eldest son, and although the Gordons were a Scottish clan Huntly itself is in England. The particular Marquis of Huntly referred to by Marshall was George Gordon [1], born in 1770 and, as the eldest, heir to the Dukedom of his father Alexander. George ascended to the title in 1827 and remained until 1836, and when he died childless the Dukedom ended, while the Marquessate and Earldom of Huntly "devolved" upon a relative, then the 5th Earl of Aboyne (according to Charles Gore). Mary Robinson (in her book Beaux and Belles of England) writes:

Doctor Beattie describes him as "the best and most beautiful boy that ever was born." He proved to be one of the most popular of the young nobility of that period. Doctor Beattie strongly advised the duchess to engage an English tutor, a clergyman, for him, recommended either by the Archbishop of York, or by the Provost of Eton. When it afterward became a question whether the young heir should go to Oxford or to Cambridge, the doctor, who seems to have been a universal authority, allowed that Cambridge was the best for a man of study, whilst Oxford had more dash and spirit in it: so little are matter altered since that time.

Fifteen years appear to have elapsed before the birth of a second son, Alexander. Both These scions of this ducal house became military men: the young Marquis was colonel of the Scots Fusileer Guards, and served in the Peninsular war, and was eventually Governor of Edinburgh Castle. Long was he remembered by many a brother officer, many an old soldier, as a gallant, courteous, gay-hearted man; with some of the faults and all the virtues of the military character. He married late in life Elizabeth, daughter of Alexander Brodie, Esq. of Arnhall, N. B., who survived him. 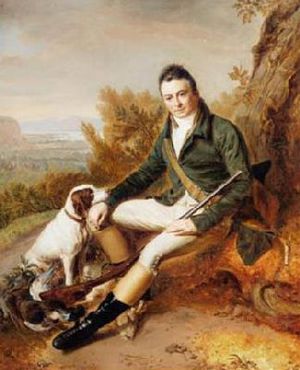 Another view of Gordon was afforded by Elizabeth Grant of Rothiemurchas, who wrote of the Marquis and his wife at the time of their wedding:

Lord Huntly now in the decline of his rackety life, overwhelmed with debts, sated with pleasure, tired of fashion, the last heir male of the Gordon line. His bride was young, and good, and rich but neither clever nor handsome. She made him very happy and paid his most pressing debts, that is her father did, old Mr. Brodie of the Burn, brother to Brodie of Brodie...He made a really large fortune; he gave his daughter, his only child, £100,000 down, and left her more than another at his death. Really, to her husband her large fortune was the least part of her value: she possessed upright principles, good sense, and she turned out a first rate woman of business.

He evidently loved to dance, as we see in this excerpt from a London paper called The Star (06/01/1799), which reported on a recent ball at Oatlands Palace, Surrey, England:

At the fete given by Her Royal Highness, the Duchess of York, at Oatlands on the 30th of May (1799), the dances were as follows: 1. Ramah Droog. 2. Miss Murray of Auchtertyre. 3. The Tartan Plaidie. 4. Lady Harriet Hope's Reel. And lastly, the enchanting tune of Miss Gordon of Troupe's Strathspey was called for by Princess Augusta, and danced twice over by all the fet. Between the second and third dance, Their Majesties desiring to see the Highland Reel in all its purity, it was danced by the Marquis of Huntley and the Lady Georgiana Gordon, Colonel Erskine and Lady Charlotte Durham, with all the elastic motion, hereditary character, and boundless variety of the Scottish dance.

The popular "Marquis of Huntley's Strathspey" was composed by William Marshall (1748-1823), said to have been one of the very first tunes he composed. Marshall worked for the Gordon family for thirty years in the capacity of Steward of the Household and later land steward, and in his spare time became conversant with mathematics, astronomy, clocks, mechanics and optics. An accomplished musician, he also found time to compose some 300 tunes. Years later Robert Burns noted that he had been "told by somebody who had it of Marshall himself, that he took the idea of his three most celebrated pieces, 'The Marquis of Huntley's Reel,' 'His Farewell' and 'Miss Admiral Gordon's Reel' from the old air 'The German Lairdie'" (Emmerson, 1971). The Rev. John Skinner wrote a famous song to this air, which begins: "Tune your fiddles, tune them sweetly...". "The Marquis of Huntly" has been compared to Niel Gow's "Miss Margaret Graeme of Inchbrakie," which was published in Gow's First Collection, 2nd edition, 1801, however, Marshall's tune was first published his in his own First Collection, 1781. The second section of Gow's piece is similar but not identical. Paul Stewart Cranford (1995) remarks that some of Marshall's tunes have been in oral tradition so long in Cape Breton, Nova Scotia, that local sets have evolved; this is one such piece. Francis O'Neill (1922) remarks: "This fine reel first published in 1781 is but one of many composed by Wm. Marshall who for thirty years was in the service of the Duke of Gordon as butler and house steward. In music as in other accomplishments he was entirely self-taught. His playing of strathspeys and reels was so inspiring, it is said, that neither the old nor the young could overcome their inclination to dance. As an amateur violin player of Scottish dance music, he was unrivaled in the last half of the 18th Century. No composer of his time was so victimized by plagiarists who appropriated his tunes, changed a few notes, and passed them off as their own under different titles."


Back to Marquis of Huntly's Strathspey (1) (The)