Back to Mrs. Kenny's Barn Dance[edit] 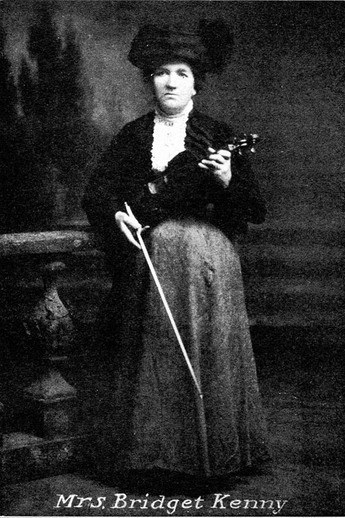 In no country save Ireland, would a violinist of such demonstrated ability as the subject of this sketch remain unappreciated and practically unnoticed, while obliged by necessity to contribute to the support of a large family by playing for a precarious pittance along the highways and byways of Dublin for a generation or more.

The Gaelic Revival brought Mrs. Kenny into the limelight, and after she had outclassed all competitors as a traditional violinist at the annual Feiseanna, winning first prize year after year, she was proclaimed "The Queen of Irish Fiddlers."

This remarkable woman's talents ought to have been regarded as a national asset. Yet it does not appear that any effort was made to take advantage of the opportunities represented by her discovery, by the establishment of a school in which the much-vaunted traditional style of rendering Irish music would be taught and perpetuated.

No. "The Queen of Irish Fiddlers," amid salvos of applause, was handed her first prize with monotonous regularity, and allowed to pass out and resume her daily perambulations as before, along the streets of the Irish capital, to woo the reluctant coin from purses often no less slender than her own.

The musical faculty, not wealth nor station, was her inheritance as the daughter of John McDonough, the premier Irish piper of his day and generation, who passed away in obscurity in his native County of Galway more than half a century ago, when little Bridget was less than two years old.

Artistic endowment is bound to find expression, and it is not surprising that this little child of genius should start to "play the fiddle" when but seven years of age. "I'm entirely self-taught, and I'm proud of it," is the way she put it when asked how she could have such wonderful control of her instrument, "and I've never been beaten in playing jigs, reels, or hornpipes, for the last forty years."

"Mrs. Kenny is a very excellent performer, the best I have heard," a writer of discrimination reports. "She has a noticeable peculiarity in 'stopping' and bowing which is very quaint and attractive. About nine years ago I heard her for the first time in a bout of playing which lasted three hours. Three years ago I heard her again, and anything better than her rendering of the 'Flogging Reel' it is impossible to conceive. Her playing of airs pleases me not quite so well, but of course her circumstances precluded her from possessing a first-class instrument."

Born and bred in an atmosphere of music and tradition, it was but natural hat Bridget McDonough, the fiddler, glorying in her art and a luxuriance of auburn tresses which "sthreeled on the ground, would favor the suit of John Kenny, a piper, who laid siege to her heart. United by more ties than one, they have since continued to play in concert for a livelihood.

Mr. Kenny, however, does not confine himself exclusively to the Irish pipes, for he can take a turn with equal facility on the bass viol, fiddle, dulcimer, and tambourine.

Their joint collection of unpublished Irish music has been awarded a prize on three different occasions.

Devotion to art does not appear to have unfavorably affected the size of Mrs. Kenny's family, for we are informed she is the prolific mother of thirteen children. Neither did the artistic temperament on both sides mar the domestic peace of the Kenny home, and, though the goddess of plenty slighted them in the distribution of her favors, have they not wealth in health and the parentage of a house full of rosy-cheeked sons and daughters, several of whom bid fair to rival their mother, "The Queen of Irish Fiddlers," in the world of music.

Back to Mrs. Kenny's Barn Dance[edit]