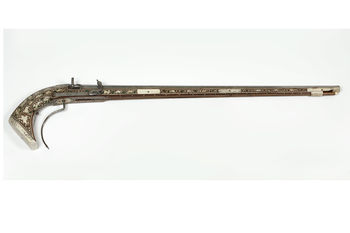 PETRONELLA. AKA - "Patronella." Scottish (originally), American, Canadian, Irish, English; Reel, Scottish Measure and Country Dance Tune. USA, New England. Ireland, Ulster. D Major (Brody, Kennedy, Kerr, Lerwick, Martin, Messer, Miller & Perron, Raven, Silberberg, Sweet): G Major (Linscott, Milne): F Major (Athole, Emmerson, Gow, Hunter, Lees, Manson). Standard tuning (fiddle). AAB (Milne): AABB (most versions). Jack Campin finds the title derives from the name petronel, a type of pistol employed in the 16th and 17th centuries. The petronel was known as a horse-man’s weapon from which both the pistol and carbine developed. The name itself is a variant of the French word petrinel or poitrinal, given because the weapon was fired with the butt resting against the chest (poitrine, from the Latin pectus), or because it was carried slung from belt across the chest. There is also a St. Petronella, the daughter of St. Peter, martyred in Rome in the first century. 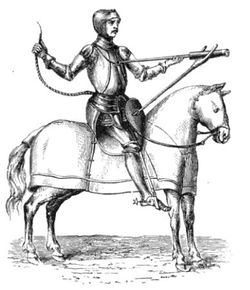 An early petronel. The long-barreled gun had to be supported for accuracy.

The tune is Scottish in origin, published in Nathaniel Gow's Complete Repository, Part Fourth, 1817. The RSCDS Scottish Country Dance Book (Book 1) also says the tune comes from Nathaniel Gow’s Repository, although gives the date of publication as 1820. The accompanying dance is said (in The Ballroom, 1827) to have been introduced by Gow at his Annual Ball, in Edinburgh, that same year. It is linked with a country dance of the same name in Scotland and New England. The dance Petronella seems to have enjoyed remarkable popularity throughout the last three quarters of a century in Scotland, write Flett & Flett (1964), where "it appears in every ballroom guide published in Scotland from 1823 to 1914, and it was also included in the repertoire of all the dancing-teachers whom we know to have practiced in Scotland within living memory." The set dance features a point where everyone stamps at once, perhaps in imitation of the weapon of the title. A standard set of tunes is often used as the vehicle for the dance in Scotland, consisting of “Dashing White Sergeant (The)” “My Love is but a Lassie Yet (1)” and “Rose Tree (The),” although many tunes may be substituted.

"Petronella" has proved a staple at New England contra dances over the last century, probably from Scottish sources. For example, it was danced in August, 1914, as part of a cotillion for the 150th anniversary celebration of the town of Lancaster, New Hampshire, according to a playbill of the period. The tune is similar to "Tink-a-Tink," an English country dance air of the 18th century, but "Petronella" itself does not generally appear in older English musicians' manuscript collections or English publications. Under a different title the melody is played in County Donegal, Ireland (Con Cassidy – "The Teelin Petronella").