Find traditional instrumental music
This is the stable version, checked on 29 October 2022.
Jump to: navigation, search 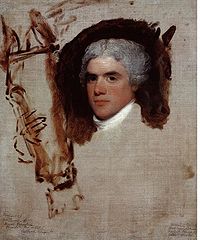 The particular Rickett honored in the title was a circus promoter, one John Bill Ricketts [1] (1769-1800), a Scottish immigrant who came from England in 1792 and flourished in America through the 1790's until his Philadelphia enterprise was destroyed in a fire on Dec. 17, 1799. He reportedly delighted his audiences by dancing hornpipes on the backs of galloping horses [Ivan Tribe], and toward the end of his career hired another famous American hornpipe dancer, John Durang, to produce pantomimes for him. Alan Jabbour (in "American Fiddle Tunes") says that circuses under his name appeared in New York City, Philadelphia, Norfolk, Charlestown, Albany, Boston, Hartford, and Montreal. 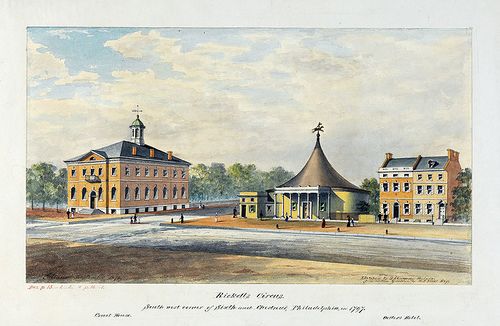 Rickett's Circus, Philadelphia, on the corner of Market and 12th St.

The earliest appearance of the melody is in Alexander McGlashan's Edinburgh-published Collection of Scots Measures of 1781, with the title "Danced by Aldridge," a reference to the great Irish-born dancer of the late 18th century Robert Aldridge (see note for "Aldridge's Hornpipe (1)"). Unfortunately, McGlashan's 3rd measure in the first strain is garbled, and the fourth measure is missing altogether in the printed version (making the first strain only seven measures long). The tune was popular in Britain under a few titles, chiefly "Manchester Hornpipe" and "Yarmouth Hornpipe." Imported to America, it became a very popular melody in all regions and genres; in the Appalachians it was one of the imported hornpipe tunes that survived relatively intact, and was only slightly less common among fiddlers than "Fisher's Hornpipe," which is easier to play. In the South the tune lost all connections with the hornpipe dance, and is often played at the same pace as a breakdown. Not everywhere, however, for as Mike Yates (2002) remarks, “the tune was actually more popular in the northern cities and is one of the few tunes that is played in the south as a hornpipe.” Collector Samuel Bayard (1981) agreed that the hornpipe was an "exceedingly well-known" piece whose title was almost invariably the same, and he found it as popular among fifers in his collecting region (southwestern Pennsylvania) it was with fiddlers. "Rickett's Hornpipe" was also popular with northeastern U.S. fiddlers, notes Bronner (1987), who writes that by the 1850's it was a common selection for fiddle-tune collections. It retained its popularity into the 20th century and was cited as having frequently been played for country dances in Orange County, New York, in the 1930's (Lettie Osborn, New York Folklore Quarterly).

Western North Carolina fiddler Bill Hensley (1873-1960) learned "Rickett's Hornpipe" from Jim Anderson, a Major in the American Civil War[1]. Hensley told one interviewer that Hugh and his brother "came over from England" and that they were both fiddle makers. Hensley also attributed the tune "Georgia Belle" to Bell. In the mid-20th-century it was one of the tunes often in the repertories of amateur fiddlers throughout the country, as, for example with Buffalo Valley, Pa., region dance fiddlers Ralph Sauers and Harry Daddario. Patrick Bonner, a fiddler from Beaver Island, Michigan, recorded the tune on 78 RPM for the Library of Congress. Bonner was the youngest son of immigrants from Arranmore Island, County Donegal (Beaver Island was destination for a number of Arranmore families), and the Donegal fiddle tradition can be heard in his playing. It was even recorded on a 78 RPM by the Irish-American group Dan Sullivan’s Shamrock Band. The tune was recorded for the Library of Congress by musicologist/folklorist Vance Randolph from Ozarks Mountains fiddlers in the early 1940's, for the same institution by Herbert Halpert from Mississippi fiddler Stephen B. Tucker (b. 1859) in 1939 (under the title "Raker's Hornpipe"), and in 1937 from the playing of Luther Strong (Hazard, Kentucky). It was played by R.L. Stephens of Camp Hill, Alabama, at a contest in Columbus, Georgia, according to the Columbus Enquirer of December 10 & 12, 1926 (Cauthen, 1990). One Georgia band heard on mid-1920’s radio playing “Rickett’s Hornpipe” consisted of a pair of uncles and a pair of nephews; the uncles were fiddlers Newt and Ed Tench, aged sixty-four and sixty-one years of age, who claimed to have been playing the fiddle for forty-five years or more. According to the newspaper the Atlanta Journal, they had “an enviable reputation as musicians in the mountain districts of Georgia,” and they had fiddled together so long that “harmony between the two is merely a matter of second nature.”[2]

A four-strain version of "Ricketts Hornpipe," retaining the exact title, was printed in J.A. Boucher's Le Répertoire du Violoneux[2] (1933, No. 62, p. 35). The first two strains of Boucher's hornpipe are faithful to the original tune, while the third strain is a variation of the the first strain. However, the fourth strain is 'crooked' or irregular and introduces new (but compatible) melodic material.