Back to Speed the Plough (1)

SPEED THE PLOUGH [1] (Bí ag treabhadh leat). AKA – “Speed the Plow.” AKA and see “Croghan Hill (1),” “Doon Reel (The),” "Glengarry (3)," "God Speed the Plow," "Naval Pillar (The),” “Off in the Morning." English, Irish, Scottish, American; Reel, Strathspey, Breakdown or Hornpipe. England; Yorkshire, Northumberland. USA; New England, New York, southwestern Pennsylvania, Maine, Michigan, Arkansas, Missouri. Ireland; Sliabh Luachra region of the Cork-Kerry border. A Major (most versions): G Major (Anderson, Breathnach, Dixon, Hall & Stafford, O'Neill {1915}, Wilson): D Major (Cahusac, Johnson, Moylan). Standard tuning (fiddle). One part (Burchenal): AB (Athole, Bayard, Hardie, Kerr, Lowe, Mackintosh, Skinner, Skye, Wilson): AAB (Kohler): AA'B (Bacon): AABB (most versions): AABB’ (Moylan): AA'BB' (Phillips/1994): AABBCCDDEEFFGGHH (Dixon). The phrase ‘God speed the plough’ is derived from a wish for success and prosperity in some undertaking, and is many centuries old. It occurs as early as the 15th century in the song sung by the ploughmen on Plough Monday (the first Monday after the twelve days of Christmas). Linscott (1939) concludes the name of this dance and tune indicates association with or derivation from the ancient rituals connected with 'Plough Monday' in Great Britain. This festival, he says, was part of the worship of agriculture which the early villagers practiced and occurred in mid winter (January): "The prayers for a good harvest were presented to the house gods with great ceremony; bread and cheese were set into the plough, and a like offering scattered to the fields for the crows. The first offering was to seek the blessing for the harvest; the second, to appease the adverse elements" (Linscott, 1939). An association with any ritual vestiges has not been proven and is, at this point, highly speculative. It smacks of the strong urge by some writers to assign great antiquity to fiddle music. “Speed the Plough” appears in various versions in many British fiddlers’ manuscripts from the 19th century, including those of John Clare (Helpston, Northants, c. 1820), William Calvert (Leyburn, north Yorkshire, 1820), Rev. Robert Harrision (Brampton, Cumbria, 1820), George Spencer (Leeds, west Yorkshire, 1831) and William Hall Lister (East Boldon, near Newcastle, mid-19th century) [see Barry Callaghan’s Hardcore English, pgs. 49-50, for noted music from the ms’s]. The melody is still popular in English sessions in modern times, although considered somewhat of a ‘beginner’s tune’. 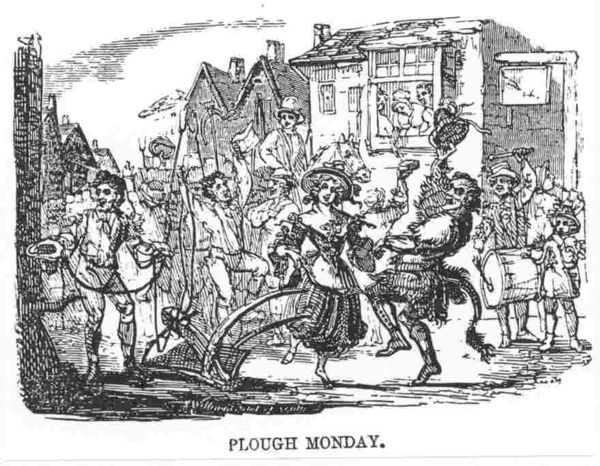 A note in O'Neill {Minstrels and Musicians, 1913} (based on the authority of the British Musical Biography) states the air was composed in 1799 by John Moorehead of Armagh, Ireland, a famous violinist who came from a musical family and who acquired some renown in the latter 18th century. O’Neill’s information was that he was born in Edinburgh, emigrating to Armagh in 1782, however, this is generally disputed. Groves Dictionary of Music (3rd edition, 1927), for example, gives his place of birth as Ireland, around 1760. He was violinist of Covent Garden Theatre in 1798, though his life ended tragically some six years later when he committed suicide by hanging in 1804. O’Neill implies that the tune was first called "The Naval Pillar" (J.S. Skinner, 1904, gives it as an alternate title) A year after Moorehead was supposed to have composed it the melody was used for a play called Speed the Plough (1800) written by Thomas Morton, and was published in New York as an instrumental piano piece about the same time. W.B. Laybourn, editor of Köhler’s Violin Repository (1881) attributes the reel to "James Muirhead, 1800". “Speed the Plough” has been attributed to others as well, including English conductor, arranger and composer Sir Henry Bishop (for more on whom see “Dashing White Sergeant”) [Murray, 1994]. Aloys Fleischmann, in his massive compendium Sources of Irish Traditional Music c1600-1855, ii (New York and London, Garland, 1998) gives three entries for the melody that clearly predate its use by Moorehead in The Naval Pillar (1800):

Whomever composed it, the melody was hugely popular and quickly entered tradition on both sides of the Atlantic--apparently about the same time--where it has appeared regularly in fiddle-tune collections in America and the British Isles ever since.

In America the tune was known in the tradition as early as 1839 when it was printed in George P. Knauff's Virginia Reels, volume I. "Speed the Plow" is cited as having often been played for country dances in Orange County, New York, in the 1930's (Lettie Osborn, New York Folklore Quarterly) and it also appears in the repertoire list of Maine fiddler Mellie Dunham (the elderly Dunham was Henry Ford's champion fiddler in the late 1920's). The title appears in a list of traditional Ozark Mountain fiddle tumes compiled by musicologist/folklorist Vance Randolph, published in 1954. To entertainer John Hartford it appears a cousin of "Greenfields of America," and he likens it to "Devil's Hornpipe" as played by Roy Wooliver. Howe (c. 1867) and Burchenal (1918) print New England contra dances of the same name with the tune, and Linscott (1939) supports that the same dance has always been linked with this tune in that region. Kerry Blech finds Kentucky fiddler Owen “Snake” Chapman’s “McMinnville’s Breakdown” to be a variant of “Speed the Plow.”

Flett & Flett report the tune a Scottish country dance and that it is the first half of the Perth Medley, peculiar to the Perth Hunt Balls. The tune was included by J. Scott Skinner in his 1921 concert set romantically entitled "Spey's Fury's.” In Scotland the country dance Speed the Plow is sometimes known by an alternate title, the Inverness Country Dance. The title appears in Henry Robson's list of popular Northumbrian song and dance tunes ("The Northern Minstrel's Budget"), which he published c. 1800, soon after the tune was written. The tune does not generally appear in Cotswold morris tradition, a type of rural ritual dance in southern England, though it was introduced to the village of Bampton, Oxfordshire, dances in 1975 (Bacon, 1974). One of the earliest recordings of the melody was in 1909 when Cecil Sharp waxed it on a cylinder from the playing of John Locke, described as a “gipsy fiddler.” Dixon (1995) prints the melody with variation sets by Robert Whinham (1814-1893), a musician, teacher, composer, dancing master and fiddler originally from Morpeth, Northumberland. One of the oddest appearances of the tune is on the barrel organ from the polar expedition of Admiral Parry of 1810. In place of a ship’s fiddler (common in those days), Parry introduced a mechanical barrel organ on board ship to provide entertainment and a vehicle to which the men could exercise (i.e. by dancing). “Speed the Plough” was one of eight tunes on barrel no. 5. The reel was adapted as a rondo by the most famous Irish pianist-composer of the early part of the nineteenth-century, John Field. “Speed the Plough” is the ‘march-past’ melody of the former British army unit The Suffolk Regiment, 12th of Foot, absorbed into the Royal Anglian Regiment in 1959. David Murray (Music of the Scottish Regiments, Edinburgh, 1994, p. 209) records that the senior partner in the amalgamated regiment was the Royal Norfolk Regiment, whose march past was “Rule Britannia. Therefore, states Murray, “Each battalion of the Royal Anglian Regiment played its former march past after ‘Rule Britannia,’ so the 1st battalion, formed from the Royal Norfolk and Suffolk regiments, follows it with ‘Speed the Plough’.” A very influential version for the modern English dance music revival was recorded in 1933 by the Morris Motors Band and released on 78 RPM by Columbia records for the English Country Dance and Song Society.

O’Neill (1913) believes the tune to be Irish in character, and states it was regarded as English due to its being first heard in English theatres, though he regretfully determined it too associated with England to include in his Dance Music of Ireland (1907). Irish variants are routinely played, however: see “Croghan Hill,” “Off in the Morning” and the related hornpipe “Ebb Tide (1).” County Leitrim piper and fiddler Stephen Grier entered the tune ("God Speed the Plough") into vol. 2 of his c. 1883 music manuscript collection.

Back to Speed the Plough (1)