Find traditional instrumental music
This is the stable version, checked on 6 February 2022.
Jump to: navigation, search

Back to Eileen Aroon (1) 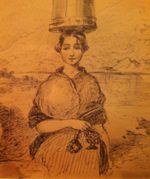 EILEEN AROON [1] (Eibhlin a Ruin) {"Eileen My Treasure" or "Darling Eileen"}. AKA – "Aileen Aroon," "Allen A'Roon," "Eib(h)lín A Rú(i)n." AKA and see "An tiocfadh tu a bhaile liom," "An d-tiocfard," "Ducdame," "Erin, the Tear and the Smile," "Robin Adair." Irish (originally), Scottish; Slow Air (3/4 time). D Major (O'Neill): A Major (Flood). Standard tuning (fiddle). AB (O'Neill): AAB (Flood). One of the oldest traceable tunes in all fiddle literature and still current in the living tradition. Flood (1905) states that it was composed in 1386 by Carrol mor O'Daly {Cearbhall O Dalaigh} (d. 1405), a famous Irish minstrel harper described by old annalists as the 'chief composer of Ireland, and Olair (Doctor) of the Country of Corcomroe,' apparently on the authority of Hardiman. Bunting and Francis O'Neill (1913) give the harpers name not as Carol/Carrol/Carroll but Gerald O'Daly, and Bunting refers to him as a contemporary of Rory Dall O'Cahan, who died in 1653, though he thinks the melody much older and that O'Daly only adapted Irish words to it. Mrs. Mulligan Fox, in Annals of the Irish Harpers gives the 1405 date for the harper's death, and Fitz Gerald speculates that, since the hero of the song says he would spend a cow to entertain his ladylove, that a date of 1450 would be consistent with a time when 'living money' was still in use. No matter what his first name, "O'Daly so captivated Eilleen (Eibhlin) Kavanagh of Polmonty Castle, Co. Carlow (near New Ross, Co. Wexford), that she eloped with him on the eve of her betrothal to a rival lover" (Flood, 1905, p. 62). An erroneous legend has the song composed by Donogh mor O'Daly, of Finvarra, Cistercian Abbot of Boyle (d. 1244), who was called 'the Ovid of Ireland,' and another version of the song was apparently composed by a 17th poet, also named Cearbhall O Dallaigh. To complicate matters further, James E. Doan (Eigse, volume XVIII, part 1, 1980) concludes there were several poets of the name of Cearbhall O Dalaigh between the 13th and 17th centuries, and suggests that the versions which have survived to the present day in Irish literature and song are really a composite of features of all, a folk-process amalgum. O'Neill (1913) records that the highly romantic story of "Eibhlin a Ruin" and her elopement with Carroll O'Daly was derived from Galway harper Cormac Common's (1703–c. 1790) repertory. "Eileen Aroon", along with Thomas Connellan's "Molly MacAlpin and "Molly St. George," comprise the three earliest Irish harp tunes with extant lyrics. It should be noted that the melody was equally popular in Scotland from the late 18th century and appears in a Scottish manuscript source as early as 1739 (according to Fleischmann).

The melody was later admired by the German composer Handel during his stay in Ireland, according to Charles O'Conor of Belanagame (Flood, 1906). A note in Pepys' diaries refers to one Joe Harris, an Irish actor in London, singing the song in Gaelic in a performance of Shakespeare's Henry V: "Among other things, Harris, a man of fine conversation, sang his Irish song, the strangest in itself, and the prettiest sung by him that ever I heard" (Flood, 1906, p. 72). It retained its popularity, being sung at the Smock Alley Theatre, Dublin, in the Christmas season of 1728 by Mrs. Sterling at the end of the opera The Way of the World, and again at that theater in December 1743 by Mrs. Storer as an interlude during performances of Julius Ceasar. Charles Coffey included it in his 1728 ballad opera The Beggar's Wedding, written soon after the success of John Gay's Beggar's Opera, and O'Sullivan and O'Neill both find this to be one of the earliest printed versions of the tune. A broadside without printer's imprint and with different words than Coffey's was published about 1740 under the title "Ailen Aroon, an Irish Ballad." In the early 19th century Thomas Moore used the melody as vehicle for his song "Erin the Tear and the Smile," published in 1808. Brian Boydell (referenced by Una Hunt, "The Harper's Legacy, National Airs and Pianoforte Music", Journal of the society for musicology in Ireland, vol. 6, 2010-11) "notes that by the 1740's and 1750's this air had become an almost obligatory addition to the repertoire of any visiting singer to Dublin and was the most popular tune used in instrumental variations through much of the eighteenth century."

Classical composers as well as Handel were also taken with the air. Matthew Dubourg (1703-1801), Master and Composer of the State Music in Ireland, composed variations on "Aileen Aroon/Eibhín a rún," and keyboard variations were similarly composed by Thomas Augustine Geary (1775-1801). Irish-born pianist and composer George Alexander Osborne (1806-1893) used the melody in the first of his Six Irish Airs (1854).

Back to Eileen Aroon (1)