King of the Fairies (The)

Find traditional instrumental music
This is the stable version, checked on 4 April 2020.
Jump to: navigation, search

Back to King of the Fairies (The) 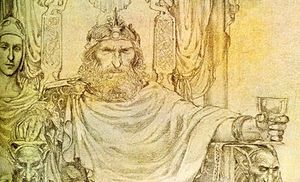 The King of Fairies

THE KING OF THE FAIRIES (Rí na Sideog). AKA and see Rí na Sideog, Bonny Charlie (1), King William of Orange, Lonesome Wedding (The), Your Old Wig is the Love of My Heart, Briton's Glory, Scollay's Reel."

"King of the Fairies" appears to be derived from a Jacobite tune called "Bonny Charlie (1)," appearing in many 18th century Scots and Northern English publications, such as Aird (1783). "King William of Orange" is a British title for the melody, while "Briton's Glory" is Glasgow Highland bagpiper, pipe teacher and pipe-maker William Gunn's adaptation of the tune as a pipe quick step.

The set dance was collected in Ireland c. 1840 by John Edward Pigot (published by P.W. Joyce in Old Irish Folk Music and Songs, 1909, No. 690) under the title "Your old wig is the love of my heart." Collector George Petrie also had it as an untitled air (Stanford/Petrie, Complete Collection, No. 1281), and it appears as "Lonesome Wedding (The)" in Frank Roches' third volume (1927). The tune is played by Cape Breton fiddlers with the Irish title ("King of the Fairies"), but as a march. Shetland fiddler John Scollay was recorded in the 1950's by Pat Shuldham-Shaw playing a reel setting of the tune, now known as "Scollay's Reel," popularized in America in the last quarter of the 20th century by John McCutcheon and New England contra dance musicians.

One tale attached to the tune (albeit perhaps a modern piece of 'blarney', as there is no folkloric connection) has it that "The King of the Fairies" is a summoning tune, and if played three times in a row during a festivity the King must appear. Once summoned, however, the King assesses the situation, and if the gathering is to his liking he may join in; if however, he does not find it to his liking he may cause great mischief.


Back to King of the Fairies (The)