Turkey in the Straw

Find traditional instrumental music
This is the stable version, checked on 18 November 2020.
Jump to: navigation, search

Back to Turkey in the Straw

A spectacularly successful tune in American fiddle tradition. Bayard (1981) suggests that a Scottish tune called "(Bonny) Black Eagle (The)" (also called "Way to Edinburgh (The)" by Oswald) resembles "Turkey in the Straw" in in both parts. Besides Samuel Bayard, Alan Jabbour, Winston Wilkinson, George Pullen Jackson and others think that a tune with an even stronger resemblance in the first part to the first part of Turkey is "Rose Tree (1) (The)" (Maureen ni Cullenaun). Their apparent conclusion is that the Turkey tune is a composite of two older Scottish tunes, the 'A' part of "The Rose Tree" and the 'B' part of "The (Bonny) Black Eagle." There are other speculations: Nathan ("Dan Emmett," pg. 168) gives an Irish reel which seems to bear close resemblance to the 'A' part of Turkey, while Dreamer (in the Oxford Book of Carols, pg. 252) gives a "little known Scottish melody" with a second section equivlent to that of Turkey (Bayard wonders if this particular strain has long been a floater). According to Linscott (1939) the tune is based on the old song "My Grandmother Loved on Yonder Little Green." Michael Cooney lists a number of fiddle tunes to which "Turkey in the Straw" is supposed to have been related, including "Glasgow Hornpipe" (Irish), "Haymaker's Dance" (English), "The Post Office" (Irish), "Lady Shaftsbury's Reel" (Scottish), "Rose Tree in Full Bearing" (Irish), "Old Mother Oxford" (a morris dance tune known in England and Scotland), and "Kinnegad Slashers" (Irish). Captain Francis O’Neill, in Waifs and Strays of Gaelic Melody suggested the latter was the original source of “Turkey,” although most reviewers dismiss this as an incidental resemblance only based on some similarities in the first part.

Whatever its origins, it was "undoubtedly in American folk tradition before the 19th century," says Bronner (1987), and that popular theater and minstrel groups during the 19th century helped consolidate and spread its popularity (it was often called "Old Zip Coon" in minstrel tradition). Fuld reports the title "Turkey in de Straw" appeared in 1861 attached to the tune through new song lyrics, copyrighted by one Dan Bryant, the melody labelled only an "old melody," presumably referring to “Old Zip Coon.”

Mention of the tune in playlists, periodicals and literature abound. “Turkey” was cited as having commonly been played for Orange County, New York, country dances in the 1930's (Lettie Osborn, New York Folklore Quarterly); Bronner (1987) agrees that it was commonly played in New York state for dances in the early 20th century. It was in the repertory of Buffalo Valley, Pa., region dance fiddlers Harry Daddario and Ralph Sauers. It was one of the tunes listed by the Clarke County Democrat of May 9, 1929, that was predicted would "be rendered in the most approved fashion" at an upcoming contest in Grove Hill, Alabama (Cathen, 1990). “Turkey” was played at a fiddlers' contest in Verbena in 1921 according to the Union Banner of October 27, 1921, and was one of the melodies listed as an example of an "acceptable old time number for a fiddlers' convention in Fayette, Alabama (Northwest Alabamian, September 4, 1930) {Cauthen, 1990}. Cauthen (1990) further cites a 1925 University of Alabama master's thesis by S.M. Taylor entitled "A Preliminary Survey of Folk Lore in Alabama" in which the tune is listed, and found it mentioned by Lamar County, Alabama, fiddler D. Dix Hollis in the Opelika Daily News of April 17, 1926, as one of "the good old tunes of long ago." The title appears in a list of the repertoire of Maine fiddler Mellie Dunham (the elderly Dunham was Henry Ford's champion fiddler in the late 1920's). Catskill Mountain region fiddler Harry Robinson (Lackawack, New York) was recorded in the field in 1944 by Benjamin A. Botkin (AFS 7759) playing an unaccompanied version of "Turkey in the Straw." The tune was recorded for the Library of Congress by musicologist/folklorist Vance Randolph, from the playing of Ozark Mountain fiddlers in the early 1940's, while Texas fiddler Eck Robertson's (with Henry Gilliland) recording of the piece (backed with "Ragtime Annie") was the third best-selling country music record of 1923. It was in the repertoire of Virginia's Fiddlin' Cowan Powers and Family in the 1920's, and West Virginia fiddler Edden Hammons played a version. Paul Gifford remarks that, around the Sault Ste. Marie area of northern Michigan and Ontario, “Turkey in the Straw” is played in the tradition in the key of B Flat Major. The Skillet Lickers (in the configuration of Gid Tanner and Clayton McMichen on fiddles, Riley Pucket on guitar and vocals, and Fate Norris on banjo) recorded the song in Atlanta on April 17th, 1926, one of eight sides for Columbia records. Wayne W. Daniel (in his book Pickin’ on Peachtree: A History of Country Music in Atlanta, Georgia, 1990) opines: “The output from this historic recording session makes for a rather unimpressive list of what even there were long-familiar tunes and songs: “Hand Me Down My Walking Cane,” “Bully of the Town,” “Pass Around the Bottle and We’ll All Take a Drink,” “Alabama Jubilee,” “Watermelon on the Vine,” “Don’t You Hear Jerusalem Moan,” “Ya Gotta Quit Kickin’ My Dog Aroun’,” and “Turkey in the Straw.””

Burl Hammons, son of Edden Hammons mentioned above, played the tune and related this story about it (printed in the booklet with The Hammons Family: Traditions of a West Virginia Family and Friends):

Well, I was—where we lived, we lived down on the Williams River, when the—when I saw this thing, and so--. And we always went to bed pretty early, my dad did, and—about eight o’clock we always went to bed—and I laid down and I, didn’t seem like I could go to sleep. And I laid there a while and just directly I heard the click, open come the door, and in walked this skeleton of a man, Lord, I’ve—he was really tall, a-must’ve been six or seven feet tall or looked like that. And he had—I noticed he had a fiddle in his hand when he walked in; and he walked about the middle of the floor where I was a-sleeping. And he took off on that Turkey in the Straw, and boys I never heard nothing played like that in my life. And I shut my eyes to keep from looking at the skeleton of a man, but I was still listening at that tune. And, when I opened my eyes, he’d—I waited till he finished the tune before I opened my eyes, but he—when he finished it he was still a-standing but he just turned and walked to the door, and just ‘click’ open come the door and out he went.

And the next morning I was a-tellingmy dad about that. “Ah,” he said, “that’s a bunch of foolishness. Quit.” He said, “That was only just a dream or something you had,” he said. “Quit thinking of such stuff as that.” “ 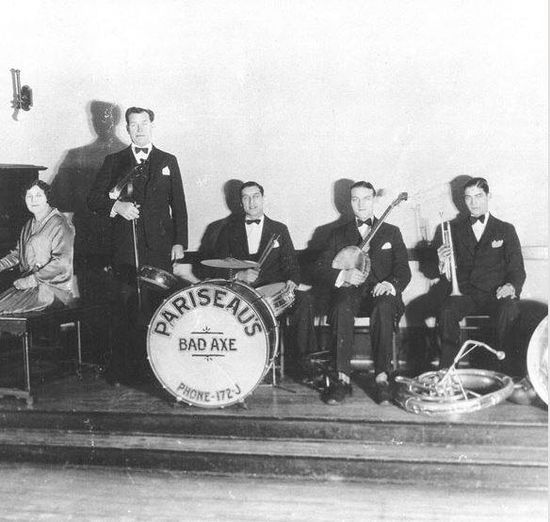 Back to Turkey in the Straw